Hello Planet! This is the 18th day of Resistance in Turkey

I haven't had a chance to write an update for a few days now but time is rushing by so fast and our feelings, reality and agenda keeps changing by the minute.

This is the 18th day of Resistance in Turkey and we still own Gezi Park! An unreal and beautiful commune filled with art and creativity and people from all beliefs, all political currents, all genders, all economic layers, all ages in the midst of the city where everything is free.

As I had written in my last update, the situation was kind of calmer and the Park was more filled with celebration. Then early in the morning on 11 June a handfull of so called 'resisters' attacked the police with molotovs. There is no need to say that these were only hired provocateurs and one of them is literally in prison right now, on paper. The police gently sprayed these 4-5 guys with a little bit of water, unlike the excessive and nightmarish rage they performed against thousands and thousands of ordinary citizens in the streets. And voila, you have a new reason to attack!

I couldn't help but ran to the gas festival on the 11th as a gas-freak. I'm pretty fond of the orange gas but pepper isn't bad either. Whatever you can get :) Can't miss the fun in the Gassy Park and now I know how Asterix feels about the Romans. The Park was under heavy heavy attack all night. Let me put it this way: Think of the Titanic movie. Replace water with gas... Hundreds of wounded people. Total chaos. It was different from the other gas nights where all we heard was people calling you to the front yelling "Come Come Come!" This time all I heard was "Wounded, wounded, wounded! Open the way!" I saw hundreds of stretchers and blankets pass by before my eyes with bleeding people through a proud crowd that kept applauding each one of them. Hard to make jokes when there are so many injured people and infirmaries everywhere. A total war zone, as the CNN reporter said. All you can do is stand and resist as long as you can. And if I can give change to the tea-guy with an active gas capsule at my feet while spraying the poor man's eyes with talcid, this is something else...


MENU OF THE DAY:

11 JUNE
-Stage motolov theatre with hired provacators (bad actors, lousy scenario, poor performance, 1 star on imdb)
-Attack the courthouse
-Arrest lawyers by force
-Discharge the Imam (who declared there was no sex or alcohol in the Mosque where the resisters took shelter and used as infirmary)
-Unlimited Gas Festival at Gezi Park all night! (don't forget to aim the capsules directly at the protesters)
- Nightly gas service and attack in Ankara (and other cities)

12 JUNE
-Criminal investigation against doctors (who helped thousands of injured people in the resistance)
-Spread fear among resisters (by an imaginary and deadly attack plan with so called 'inside information' - EPIC FAIL!)
-Meet celebrities in the prime ministry (only the ones who have no idea what's really going on or the speech/conscience impaired)
- Nightly gas service and attack in Ankara (and other cities)

13 JUNE
-Release some of the arrested (lawyers, people who use twitter for resistance, people who walk around with gas masks and helmets)
-Insult the resistance (by saying that they shit and pee in the park and the park stinks. - Man, I couldn't believe my eyes when I saw how clean the toilets were under the heaviest attack.)
-Oooops! Warning from the EU Parliament..
-The whole world says you can’t handle a crisis Bro! Boo hoo..
-Meet more clueless celebrities, save time
-Emergency meeting with Taksim Resistance representatives (say they’re too crowded, you only want to talk to two people, not eight. Good one!)

- Nightly gas service and attack in Ankara (and other cities)

AN ORDINARY DAY AT THE PARK
-Wake up
-Breakfast in bed/tent (Woodstock classic)
-Clean the park after the nights police attack
-Attend to the wounded
-Replant flowers and vegetables
-Rebuild tents and everything
-Art and performances
-Refresh requirement lists (gas mask, fire extinguisher, medicine, food, books, clothes, pet food etc. etc.)
-Wow, in a few hours we have more than we need of everything. Homemade sandwiches with special handwritten notes on each: You're the most beautiful resistant I've ever seen!
-Skip rope, play ball
-Unlimited humor
-Tweet the Mayor who keeps getting more and more romantic about birds and flowers
-Call mom
-Piano recital for thousands of people in the square
-Mothers form human chain around the park to protect their children from the police. Tears all over!
-Next day, all over again...

So.. around 7000 people injured, many patients are still in critical zone and 4 people dead. I can't imagine that someone would die for me in my lifetime. Abdullah Cömert, Ethem Sarısülük, Mehmet Ayvalıtaş, Mustafa Sarı! You will always be in our hearts...

-who intervenes in my LIFE STYLE & BELIEFS
-who INSULTS ME by calling me a marginal, a drunk, a heathen, a terrorist
-who says how I should live, what I should drink, WHERE I SHOULD KISS, how many kids I should have, control my birth/abortion rights, freedom of speech
-turns the media into a crippled puppet and violates the nations rights of INFORMATION
-who ravages every green spot in the country and wants to FILL EVERYWHERE WITH CEMENT
-who destroys social meeting areas by building underpasses and overbridges, sweeping people away from the streets and parks and pushes them into their homes and shopping malls. trying to build a ZOMBIE NATION of savage consumers.
-who destroys archeological sites and historical buildings to turn them into SHOPPING MALLS & LUXURY HOTELS
-who PROVOCATES the counrty by driving people towards VIOLENCE and tries to DIVIDE our people
-who wants to KILL ANIMALS in the streets
-who refuses my right to DEMONSTRATE WITHOUT PERMISSION
-who refuses my right to be represented with an ELECTION TRESHOLD

I WANT TO THANK THE PRESIDENT
-for healing my recent depression with the gas festival adrenaline
-for rediscovering myself
-for the resistance crash course and the booty camp
-for no single youth is 'bored' or 'hopeless' anymore
-for making 'apolitical' the new 'political' - very sexy..
-for the feeling of walking in my own streets now
-for uniting everyone in this country
-for destroying the fear
-for reminding us that this is a country where NEIGHBOURHOOD rules and PICNIC reigns
-for talking me out of leaving the country, i'm not going anywhere now that we have HOPE!
-for talking me into having children. yes I want to have brave and beautiful kids now to stand against the likes of you

But man, I do love your gas! Keep it coming ;) This is just the beginning, and it's going to be a whole lotta fun... 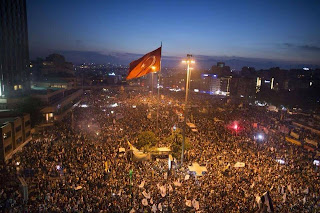 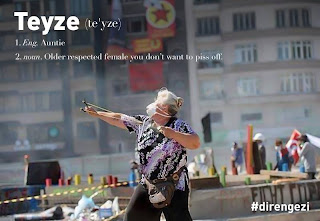 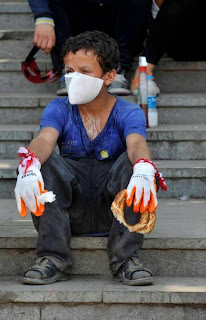